In this project, I combine my interest in artwork that speaks to power, with my research in the conservative myth-history of America, illustrating the inaccuracies found in Texas’ 2014 schoolbooks, which include assertions such as:

In depicting the outlandish claims made in the 2014 Texas schoolbooks, I am manipulating this media by hijacking the text and creating my own illuminating images. By “illuminating”, I refer to both the practice of illustrating, as the word was used in the context of medieval manuscripts, as well as the spotlighting or clarifying of information.

In much the same way that those editing history to their liking try to present their work as authentic to the quoted age, I have utilized “aging” techniques to make my compositions read as if they were native to the Revolutionary War era, rather than modern constructs. To this end I have been teaching myself calligraphy. I have employed an archaic dip pen in my drawing and writing and have now went so far as to do much of the illustrating with a quill pen that I fashioned from a feather. I have also employed the use of actual bull feces in my depictions of the bullshit passing for History in Texas public schools. I have dubbed this “special” ink Texas Tea, in honor of the Texas State Board of Education. I have employed ceramic techniques in the creation of sculptural objects that can function as illustrations through photographing them. These sculptures function in a dual way, the straightforward image or photograph of, serving to illustrate the schoolbook text, while the sculptures, unbeknownst to the casual observer, also function as teapots, tea caddies or other vessels, in reference to the tea party movement, and may reveal additional elements on the unseen sides, adding layers of content to the pieces.

My drawings and other media are displayed with the texts that inspired their creation. When accompanied by these contemporary textbook quotes, the visual works prompt an internal dialogue that questions why they are executed in an archaic style and why they were made at all, raising awareness of the misinformation being distributed in public schools with public monies. When these fictive textbook statements are illustrated, the bizarre nature of the claims, and the accompanying breach of the wall of separation between church and state, is manifested in a more immediate way than textual critique alone can provide. Creating this work is my interventionist response to the political and corporate indoctrination being levied against our most vulnerable citizens in a way that is so harmful to our collective interests. By illuminating and subverting the very texts created to misinform, my work does the very opposite. 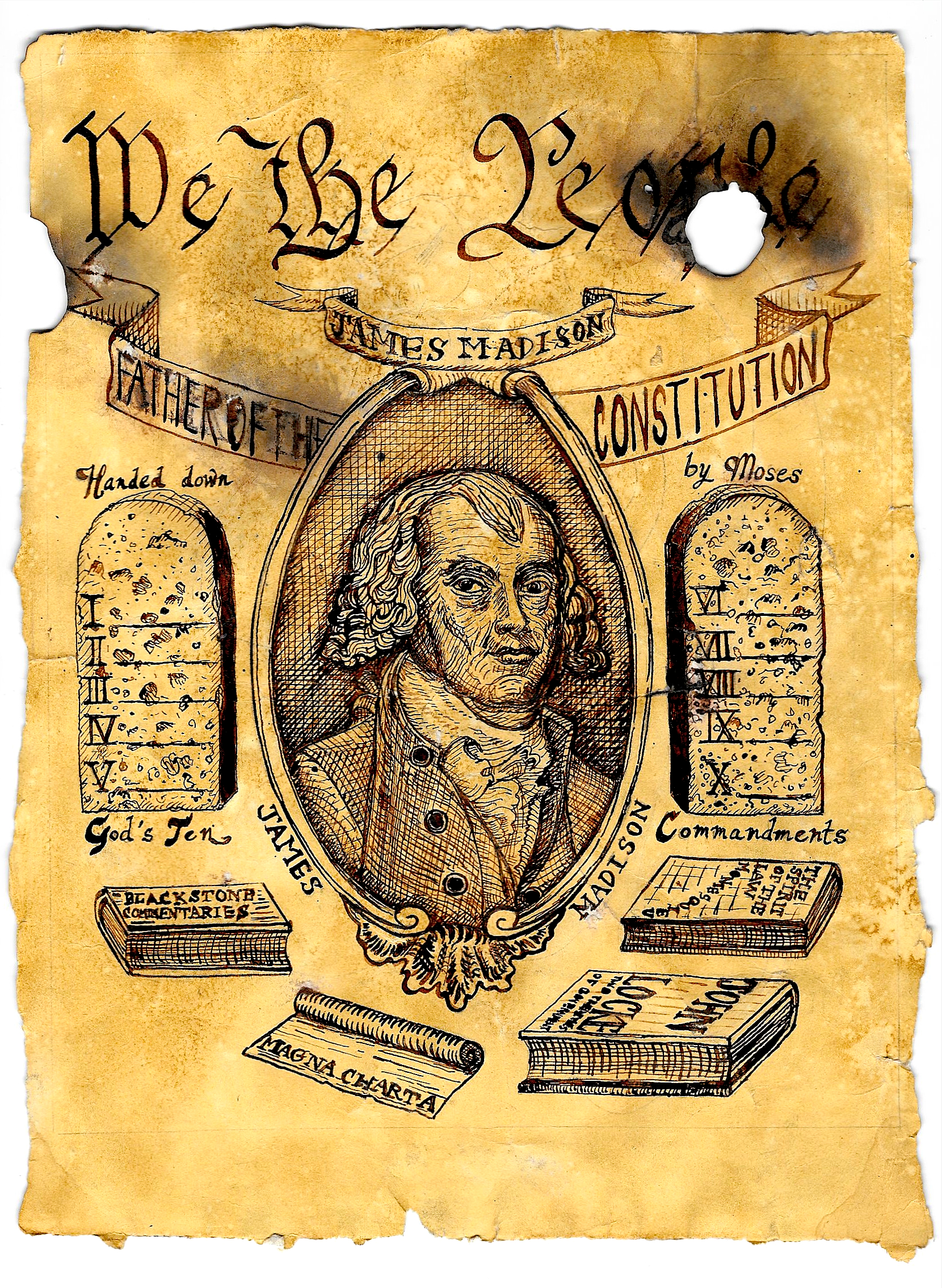 Where Did the Founders get their Ideas, “Texas Tea” (bullshit ink) on stained paper, Bryan Anthony Moore, 2014.