FROM CARTOONS TO CULTURE JAMMING – THE ARTIST AS SUBVERSIVE

As a child I was strongly impacted by the precision, humor and style of Thomas Nast’s cartoons in my history textbooks. From his engravings, I learned to appreciate the captivating beauty of skilled line drawings and the limitless potential of speaking truth to power through images.

A German immigrant to the United States, Nast created the images that became the blueprint for the way that iconic figures such as Uncle Sam and Santa Claus have been depicted ever since. Nast seemed to capture the primal or animalistic natures of his subjects, depicting Boss Tweed variously as a vulture or as a man with a moneybag for a head. Nast’s career of exposing private and government corruption (muckraking) and championing the common people against the interests of a corrupt elite illustrated the power of visual communication. President Grant was reported to have attributed his election in 1868 to the “sword of Sheridan and the pencil of Nast.” Lincoln was reported to have said, “Thomas Nast has been our best recruiting sergeant.”[51]

Thomas Nast created the republican elephant, popularized the democratic donkey and swayed public opinion time after time through the strength of his images. His scathing critique of the KKK, racial segregation, slavery, the plight of the Chinese American and the mistreatment of Native Americans were very progressive in the nineteenth century, although his derogatory depictions of Irish Catholics, and Catholicism in general, were very much in step with the xenophobic and anti-papist attitudes of his time.[52]

Nast, raised a Catholic, left the church. Like many nineteenth century Americans, Nast believed that fealty to the pope and the Catholic Church threatened American sovereignty. Nast saw Catholic school requests for government school funds as a threat to public or “common” schools[53] and saw parochial schools as instruments of theocracy.

The contemporary conservative narrative is a continuation of the imperialist mythology of the 1800s that came to supersede the revolutionary spirit of our nation’s origins. Today, artists continue to use art and the image to subvert this conservative ideology. I have been researching those that do so through the imitation or hijacking of its’ means of transmission. 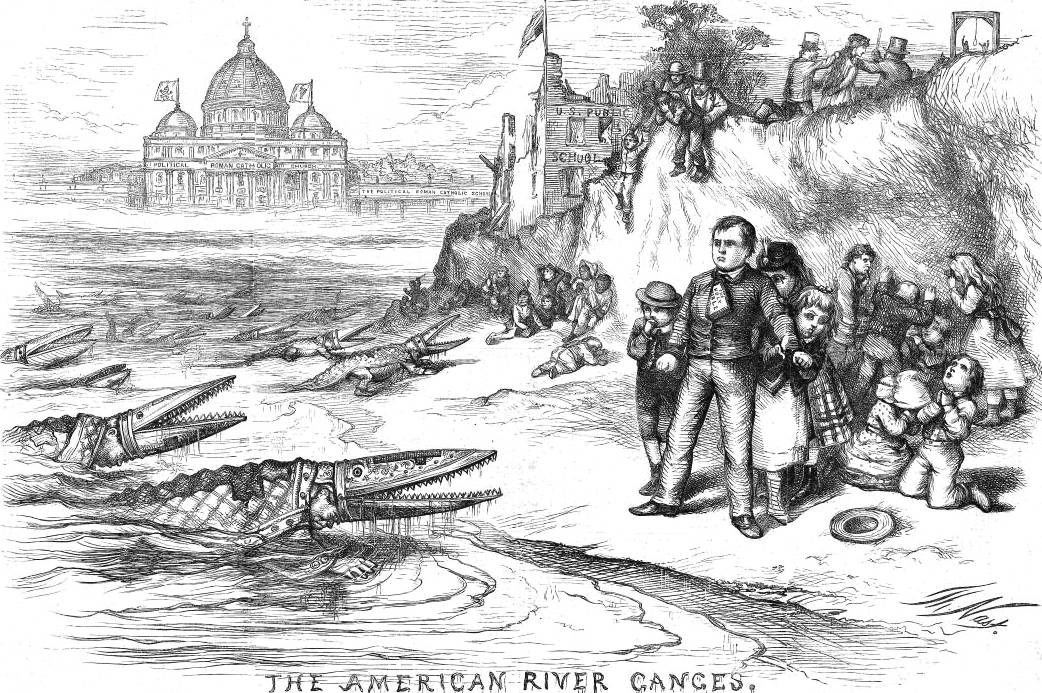 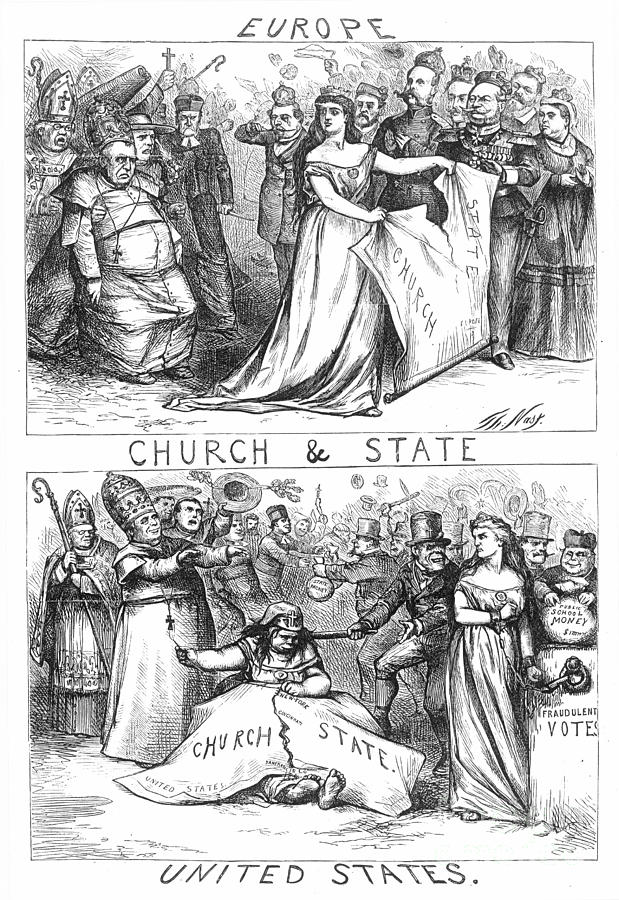 Hans Haacke is an artist critical of social and political/governmental systems. In his work, Painting in Oil, Homage to Marcel Broodthaers, Haacke addressed American imperialism in Europe.

In 1982, at the Documenta 7 exhibition, Haacke exhibited a very large work that included oil portraits of Ronald Reagan and Margaret Thatcher in 19th-century style, facing on the opposite wall a gigantic photograph of the demonstration against nuclear arms held earlier that year—the largest demonstration in Germany since the end of the Second World War. The clear implication, supported by Haacke’s remarks, was that these two figures were attempting to roll back their respective nations to the socially and politically regressive, laissez-faire, and imperialist policies of the 19th century [emphasis mine].[54] Similarly, I feel that the Tea Party, their conservative allies and their corporate sponsors are currently attempting to move the United States back to the nationalism, imperialism, Social Darwinism and laissez-faire capitalism of the 19th century. To quote Historian Ray Raphael:

Stories of national creation reflect the romantic individualism of the nineteenth century, and they sell our country short. They are strangely out-of-sync with both the communitarian ideals of Revolutionary America and the democratic values of today. The image of a perfect America in a mythic past hides our Revolutionary roots, and this we do not need. The notion of popular sovereignty, by contrast, is more appropriate for the twenty-first century. People can seize control of their own political destinies — the American Revolution serves as a case in point, a model for all time. “Government has now devolved upon the people,” wrote one disgruntled Tory in 1774, “and they seem to be for using it.” That’s a story we do not have to conjure, and what an epic it is.[55]

There is a wide chasm between the empowering ideals of the founding of our nation, and the carefully crafted narrative that the wealthy have employed since the nineteenth century in order to solidify the power of the few over that of the many.

Some contemporary artists subvert the means of propaganda distribution to their own ends as a way of criticizing the corporate/state messages omnipresent in the mass media. This practice was dubbed “culture jamming” by the experimental noise rock group Negativland.

Oxford Dictionaries defines culture jamming as, “the practice of criticizing and subverting advertising and consumerism in the mass media, by methods such as producing advertisements parodying those of global brands.”[56]

On the album JamCon ’84, in which Negativland first used this term that others have since employed, Negativland states,

As awareness of how the media environment we occupy affects and directs our inner life . . . some resist. The skillfully reworked billboard . . . directs the public viewer to a consideration of the original corporate strategy. The studio for the cultural jammer is the world at large.[57] 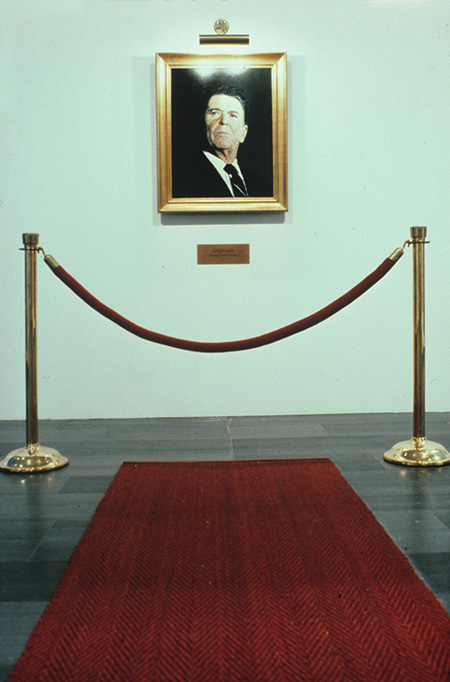 Jennings is a contemporary artist that employs the practice of culture jamming in his pamphlets, sculptures and prints. As described on his website packardjennings.com, his work Bible Stickers, 2005, was based on stickers that were officially placed inside Georgia public school biology textbooks that read:

Evolution is a theory, not a fact, regarding the origin of living things. It should be read with an open mind and critically considered.

Jennings created his own stickers that were given away with the following instructions:

Keep this sticker in your wallet. When you stay in a motel, adhere your sticker to the inside jacket of the Bible.

The text of the stickers read:

This Bible Contains material on creationism. Creationism is a parable, not a fact, regarding the origin of living things. This material was written by normal men almost two thousand years ago and should be approached with an open mind and critically considered.[58]

I feel a great deal of affinity to this project with it’s attempt at striking back at the conservative attempt to dumb-down our children’s textbooks by rolling back our Constitutional right to a separation of church and state. This project illustrates how artists can hijack the means and tactics of (mis)information dispersal employed not only by corporations but by the church and state as well. 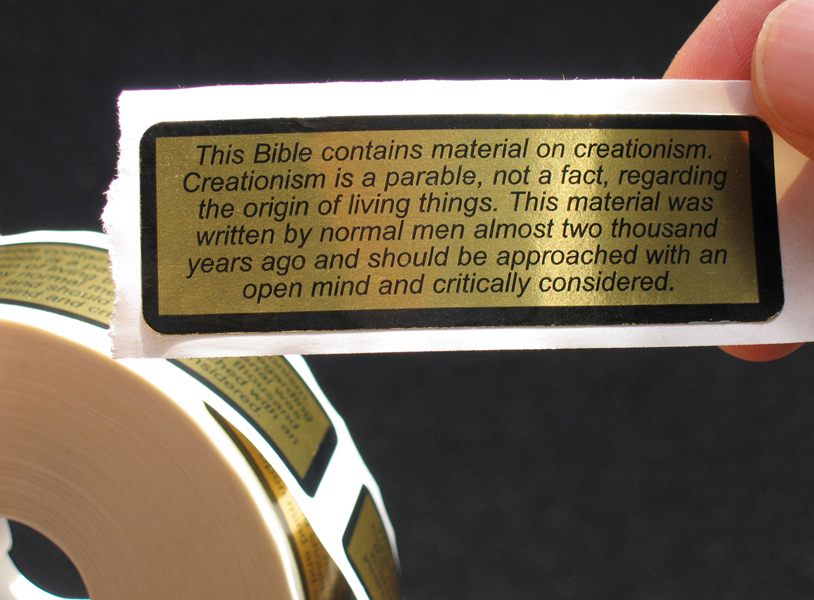 The Yes Men are an activist group composed of Jacques Servin and Igor Vamos and their network of supporters. They typically pull off politically motivated pranks such as impersonating corporate CEO’s, spokesmen or websites in a practice they’ve called “identity correction”.

Early this morning, nearly a million New Yorkers were stunned by the appearance of a “special edition” New York Post blaring headlines that their city could face deadly heat waves, extreme flooding, and other lethal effects of global warming within the next few decades. The most alarming thing about it: the news came from an official City report.

Distributed by over 2000 volunteers throughout New York City, the paper has been created by The Yes Men and a coalition of activists as a wake-up call to action on climate change. It appears one day before a UN summit where Secretary-General Ban Ki-Moon will push 100 world leaders to make serious commitments to reduce carbon emissions in the lead-up to the Copenhagen climate conference in December. Ban has said that the world has “less than 10 years to halt (the) global rise in greenhouse gas emissions if we are to avoid catastrophic consequences for people and the planet,” adding that Copenhagen is a “once-in-a-generation opportunity.”

Although the 32-page New York Post is a fake, everything in it is 100% true, with all facts carefully checked by a team of editors and climate change experts.

“This could be, and should be, a real New York Post,” said Andy Bichlbaum of the Yes Men. “Climate change is the biggest threat civilization has ever faced, and it should be in the headlines of every paper, every day until we solve the problem.”[59]

This work dealt with the manipulation of corporate print media, which often carries corporate or state misinformation, by replacing it with a subversive proxy. The Yes Men’s “Special Edition” demonstrated the artistic potential available in hijacking corporate information vehicles to publicly disseminate data, in this case, illuminating glaring governmental neglect and endangerment. 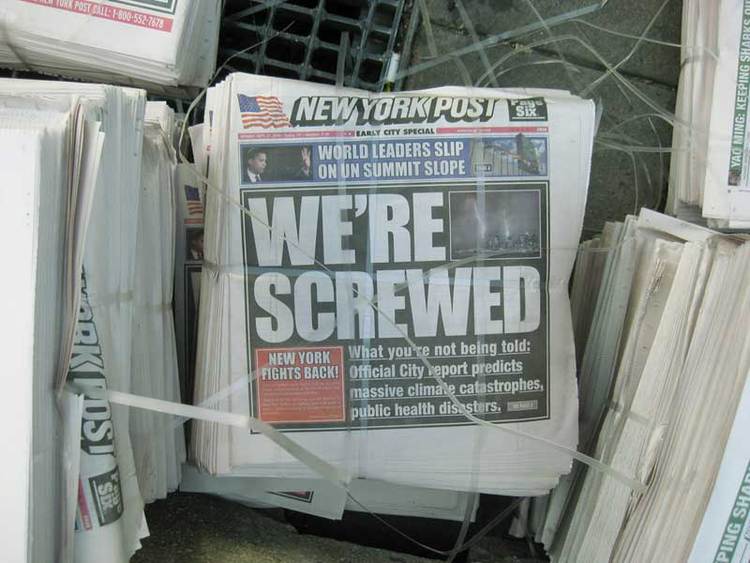