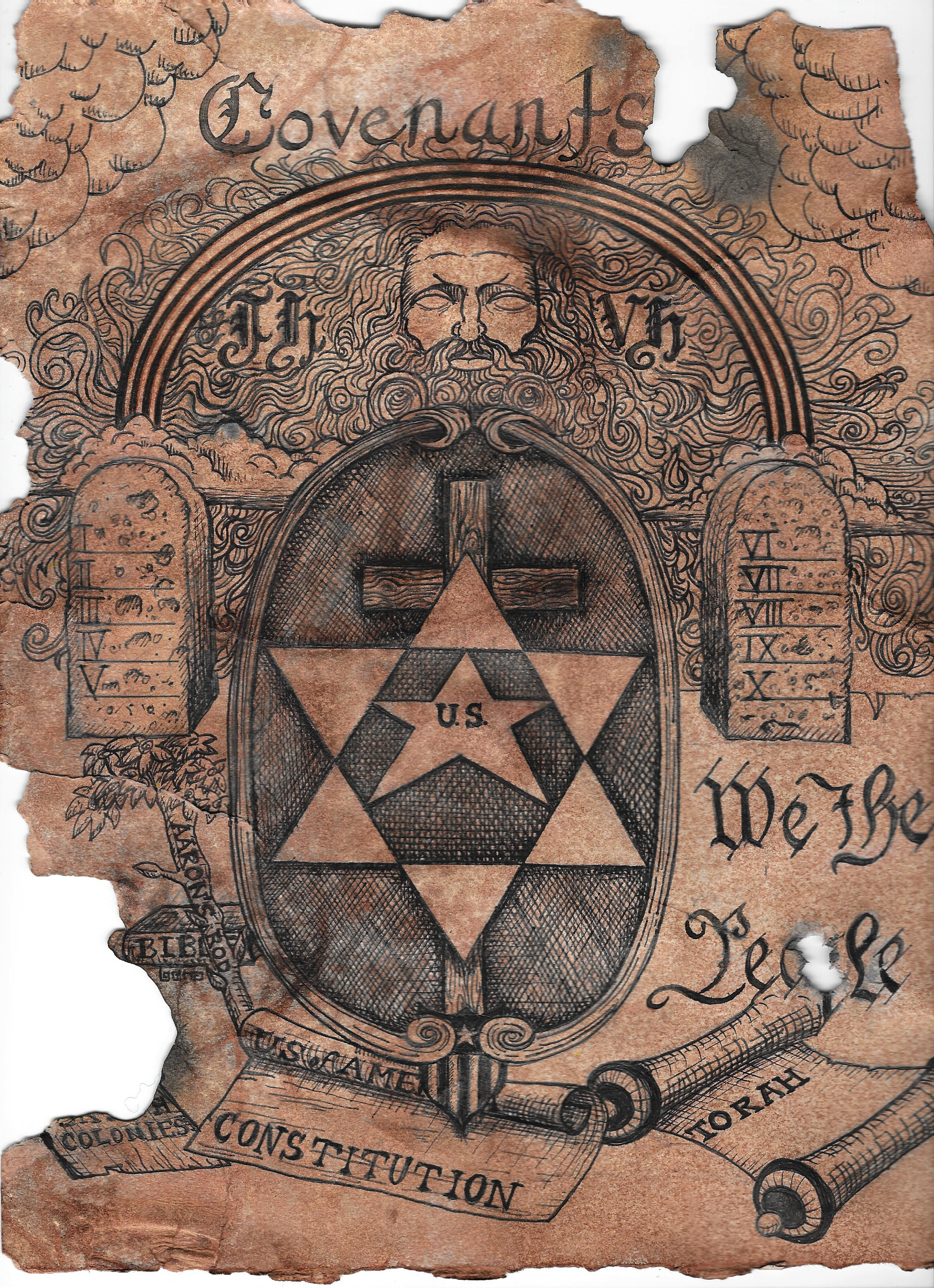 The Biblical Idea of a Covenant, quill, bullshit ink and India ink on tea stained paper, Bryan Anthony Moore, 2015. Illustration of McGraw-Hill School Education – United States Government text ““The biblical idea of a covenant, an ancient Jewish term meaning a special kind of agreement between the people and God, influenced the formation of colonial governments and contributed to our constitutional structure.”

“The biblical idea of a covenant, an ancient Jewish term meaning a special kind of agreement between the people and God, influenced the formation of colonial governments and contributed to our constitutional structure.”

The American Founders did believe in a social contract, but their version of that contract was derived primarily from modern British political thought, and John Locke’s thought in particular. Since Locke’s version of the social contract was in many ways a repudiation of the biblical covenant view referenced in this passage, this passage provides the student with almost the opposite of the historical truth.[1]

Contrast the above quote about the idea of a “biblical covenant” influencing our constitutional structure with what Jefferson wrote on the subject, in this excerpt of his letter to Samuel Kercheval:

Some men look at constitutions with sanctimonious reverence, and deem them like the arc of the covenant, too sacred to be touched. They ascribe to the men of the preceding age a wisdom more than human, and suppose what they did to be beyond amendment. I knew that age well; I belonged to it, and labored with it. It deserved well of its country. It was very like the present, but without the experience of the present; and forty years of experience in government is worth a century of book-reading; and this they would say themselves, were they to rise from the dead. I am certainly not an advocate for frequent and untried changes in laws and constitutions. I think moderate imperfections had better be borne with; because, when once known, we accommodate ourselves to them, and find practical means of correcting their ill effects. But I know also, that laws and institutions must go hand in hand with the progress of the human mind. As that becomes more developed, more enlightened, as new discoveries are made, new truths disclosed, and manners and opinions change with the change of circumstances, institutions must advance also, and keep pace with the times. We might as well require a man to wear still the coat which fitted him when a boy, as civilized society to remain ever under the regimen of their barbarous ancestors [italics mine].[2]

Jefferson contrasts the container bearing our secular laws (the Constitution) with the container that bore the religious laws of the Old Testament. The Arc of the Covenant was said to contain the two Tablets of Law, which were inscribed with the Ten Commandments. Jefferson argues that unlike the idea of biblical covenants, the secular laws of the United States were designed to “be touched,” and evolve with changing times and circumstances.