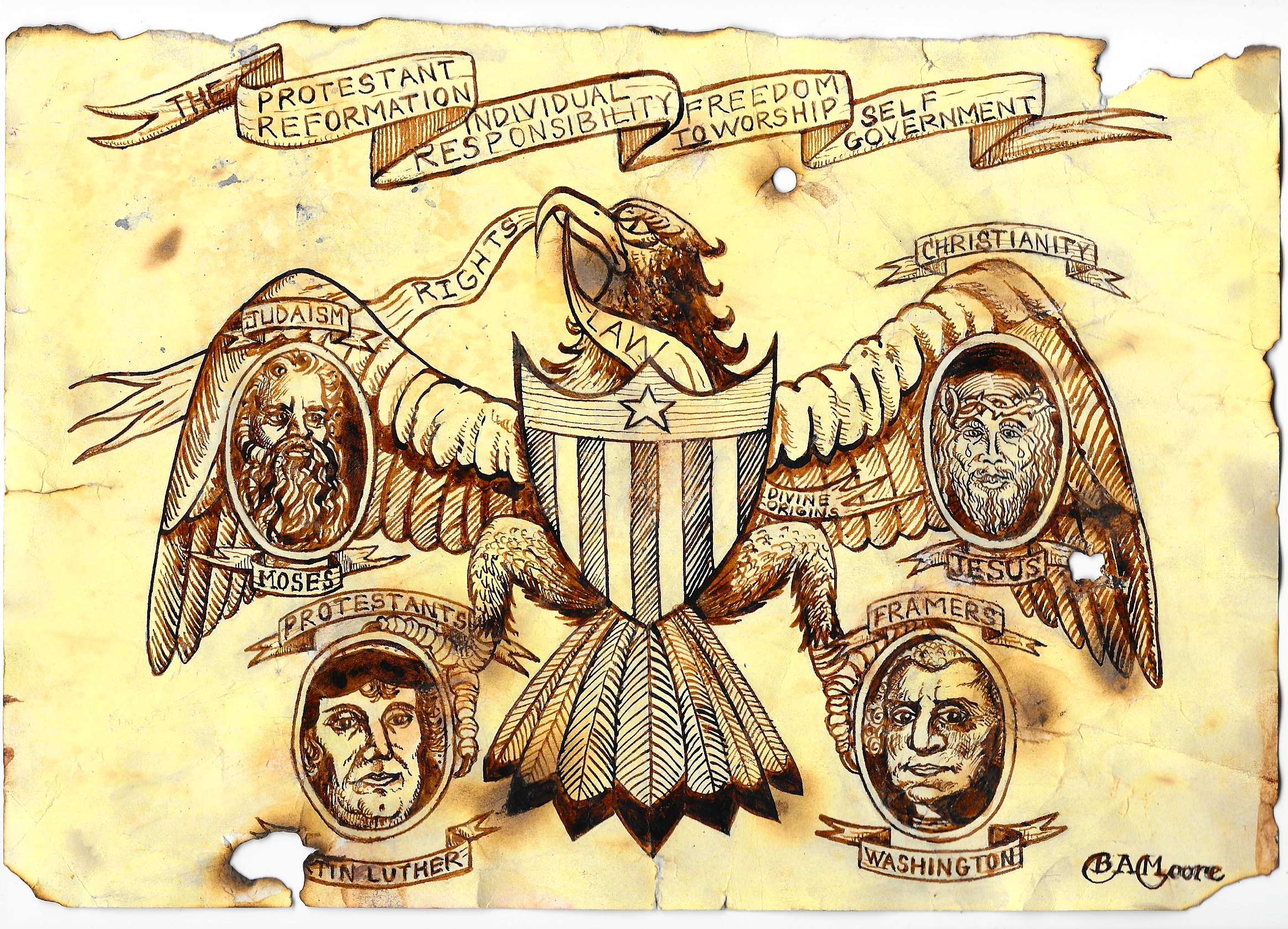 Houghton Mifflin Harcourt claims Judeo-Christian beliefs were the origin of the Founders’ thoughts on freedom of worship, self-government, and individual responsibility:

Text has a section on “Judeo-Christian Influences” that reads: “The Framers’ political thinking was influenced by a Judeo-Christian religious heritage, which includes traditions common to both Judaism and Christianity. These religions see the law and individual rights as being of divine origin. Moreover, the Framers benefited from the Protestant Reformation, a sixteenth-century Christian reform movement whose leaders developed ideas about individual responsibility, the freedom to worship as one chooses, and self-government.”

This passage gives no example of a law or set of laws in the Bible that influenced the Founders and no example of a Founder or a founding document that was influenced by the “Judeo-Christian” concept of law. The text’s claim that the Reformation was a source of the Founders’ views on ­individual responsibility omits several important pieces of information. Major figures in the Protestant Reformation such as Martin Luther and John Calvin may have supported freedom of worship for their own views, but they often did not support freedom of worship for many competing religious views. Similarly, the views of major Reformation figures, including Luther and Calvin, about self-government were far more limited than, and had little in common with, the views of the American Founders about self-government.

Finally, the paragraph could leave students with a misleading impression about the Founders’ religious views. The passage’s claim that Judaism and Christianity stresses that individual rights are of “divine origin” and that these views influenced all of the Founders suggests that all of the Founders believed that this biblical God was the source of natural rights. Many Founders did, of course, believe in the biblical God. Other Founders, though, were influenced by Deism, and their conception of God departed in significant ways from the biblical God.[1]

Some of the Founders may have had strong religious convictions that informed their political beliefs. However, others strongly believed that the inspiration for individual rights and freedoms had come from English laws that had origins in continental Europe, and that were inherited from Pagan Anglo-Saxon migrants, or from the Greek and Pre-Christian Roman democracies. Some of the Founders even implied that it was the Christian Norman invaders that first wrested these liberties from their ancient English forebears. In a letter to Major John Cartwright, dated June 5th, 1824, Jefferson wrote:

A perpetual claim was kept up by the nation [England] by their perpetual demand of a restoration of their Saxon laws; which shews they were never relinquished by the will of the nation. In the pullings and haulings for these antient rights between the nation and it’s kings of the races of Plantagenets, Tudors & Stuarts, there was sometimes gain, and sometimes loss, until the final reconquest of their rights from the Stuarts [emphasis mine]. The destitution and expulsion of this race broke the thread of pretended inheritance, extinguished all regal usurpations, and the nation re-entered into all it’s rights; and altho’ in their bill of rights they specifically reclaimed some only, yet the omission of the others was no renunciation of the right to assume their exercise also, whenever occasions should occur the new king received no rights or powers but those expressly granted to him. It has ever appeared to me that the difference between the whig and tory of England is, that the whig deduces his rights from the A-Saxon source, and the tory from the Norman. . . . I was glad to find in your book a formal contradiction, at length, of the judiciary usurpation of legislative powers; for such the judges have usurped in their repeated decisions, that Christianity is a part of the common law. The proof of the contrary, which you have adduced, is incontrovertible; to wit, that the common law existed while the Anglo-Saxons were yet Pagans, at a time when they had never yet heard the name of Christ pronounced, or knew that such a character had ever existed [emphasis mine].[2]

Jefferson clearly thought that the Bill of Rights had Anglo-Saxon precedents from England’s own myth-story; precedents that had merely re-surfaced in 1215, when Englishmen achieved, as Jefferson states in the letter above, “the final reconquest of their rights from the Stuarts.” This “reconquest” refers to the signing of the Magna Charta, an incredibly important document in the development of Western democracies. But Pearson Education’s textbook, quoted below, emphasizes the influence of the Ten Commandments, a short list of religious do’s and don’ts, rather than that of the Magna Carta, which provided for church rights, protection from unlawful imprisonment, a speedy trial by a jury of one’s peers, reasonable punishment for trivial crimes, protection of property, limited taxes, and other rights and protections to citizens.[3]