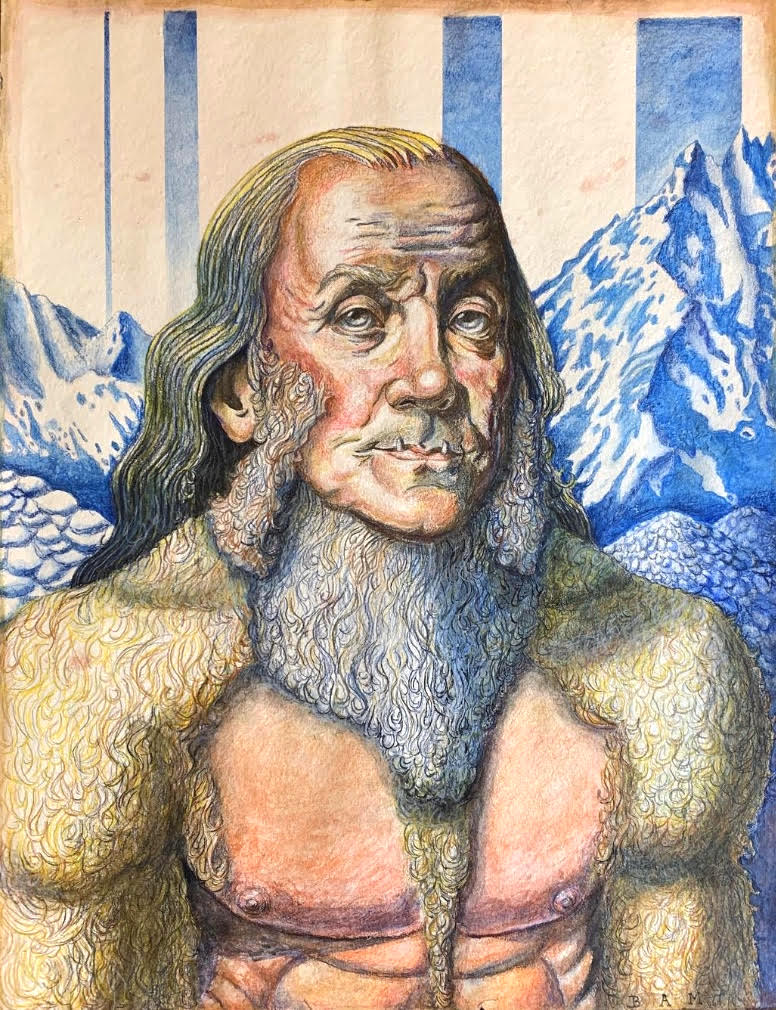 My work involves research into various nationalistic histories of the United States. Our complex history often deals with pre-industrial times so removed from the present experience that they’ve become fabled times of myth which various groups selectively edit, adding specific quotes to the conservative or liberal canon and omitting any contrary to their beliefs. This is done in a manner quite similar to how politicians can find a passage somewhere in the Bible that selectively quoted, can be made to appear supportive of almost any viewpoint.

Fictive histories weave together fact and fiction and my chimeric figures seek to present a visual analogy to this process, combining dinosaurs and mythological titans from a cloudy indistinct past with our American heroic “giants” of pre-industrial deep time. My works encompass religion, politics, and history as interrelated aspects of a national mythos that very much informs the present in which the Founders, Framers and Civil War personalities have achieved nationalistic statuses on par with saints, demigods and martyrs.

I challenge the authenticity of historical objectivism through illustrations of specifically researched and verifiably false texts in public school history textbooks. My visual representations of said historical claims highlight the ridiculousness of these propaganda-laden works. I have went so far as to create my own ink incorporating actual bull feces in the creation of a beautiful sepia toned pigment with which I then use a homemade feather quill to depict the B.S. printed in public school books. Also accompanying these illustrations are my critical yet humorous watercolor paintings which I call “illuminations” that act as visual metaphors to the chimeric formations of myth-histories, which I call “mythstory.” I frequently work on large installations of paper or Tyvek, wallpapering spaces floor to ceiling and working on huge murals in colored calligraphy ink and black Sumi-e. These are created in front of the public, spontaneously incorporating my dialog with viewers as I work, along with historical imagery, current news, stream of consciousness rants, free style poetry, mythical images, quotes and gravity induced drips, runs and rivulets of ink. These installations deal more with current events and are very conceptually related to the conventionally scaled illuminations discussed above. To compliment my two dimensional works I have created bronze sculptural forms of my national myth-storical images, carved these figures into articulated wooden dolls and built them out of clay and into teapots and tea caddies to add an extra dimension of irony to my takedown of tea-party affiliated founding myths and obfuscations.

I often work in styles and media that mimic those of the of the time of the subjects depicted, sometimes “aging” the work or producing “documents” that may be viewed as having been captured from the past as a metaphor for the way false histories are presented as authentic to their quoted age. My works ask the viewer to consider that history is often fictive as it is as factual, and that the documentation of past and current events is more subjective than scientific.