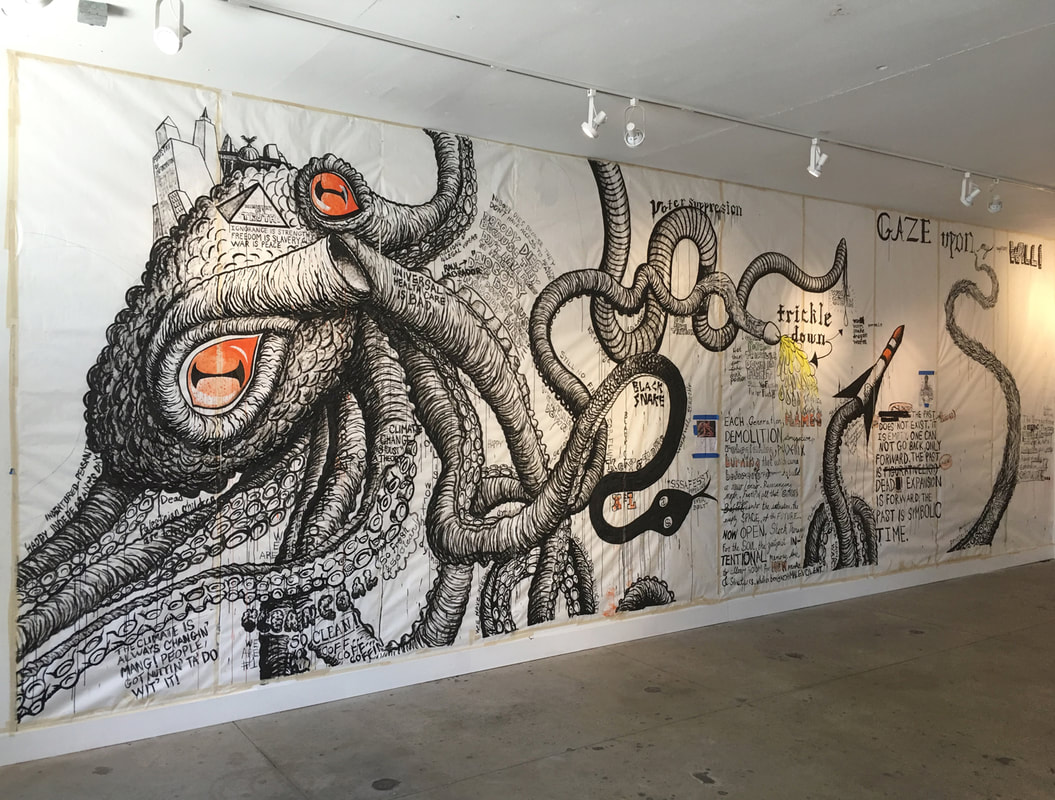 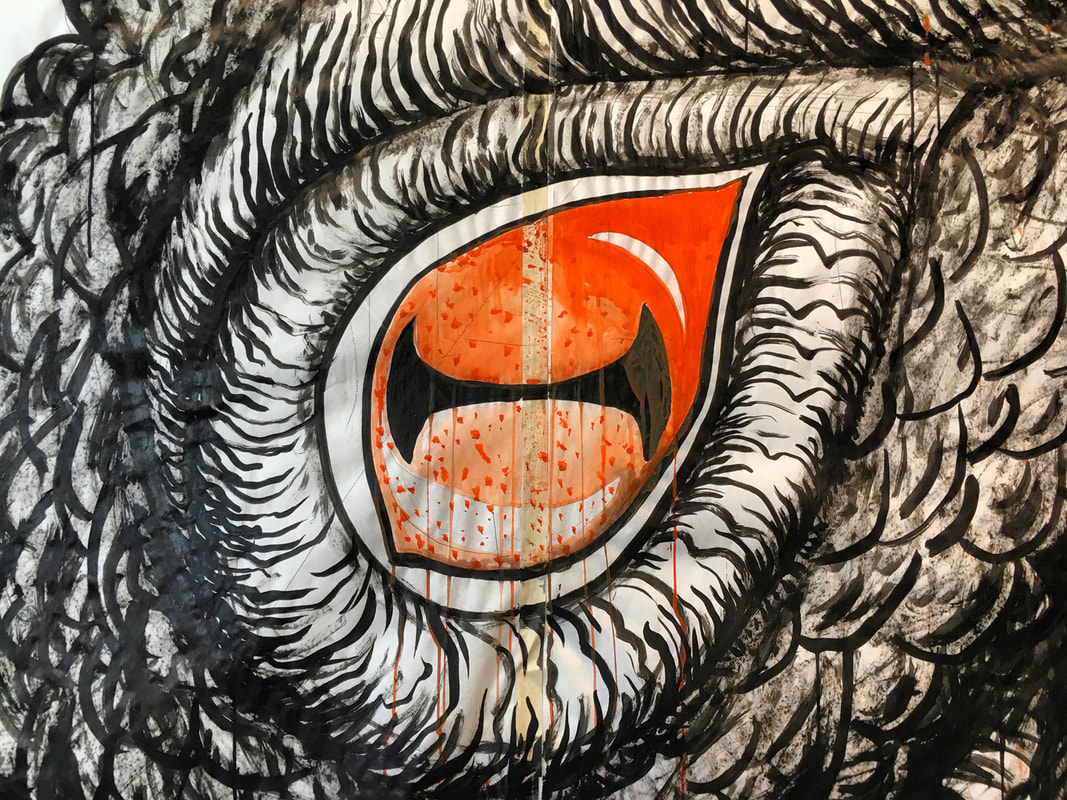 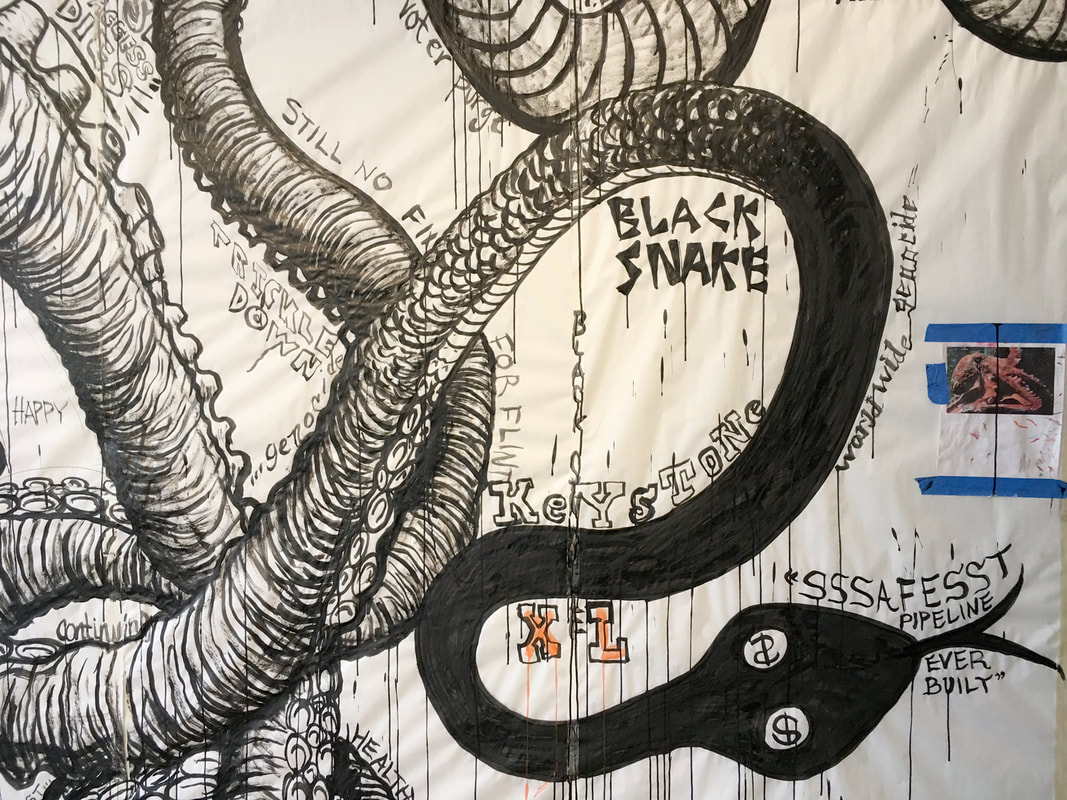 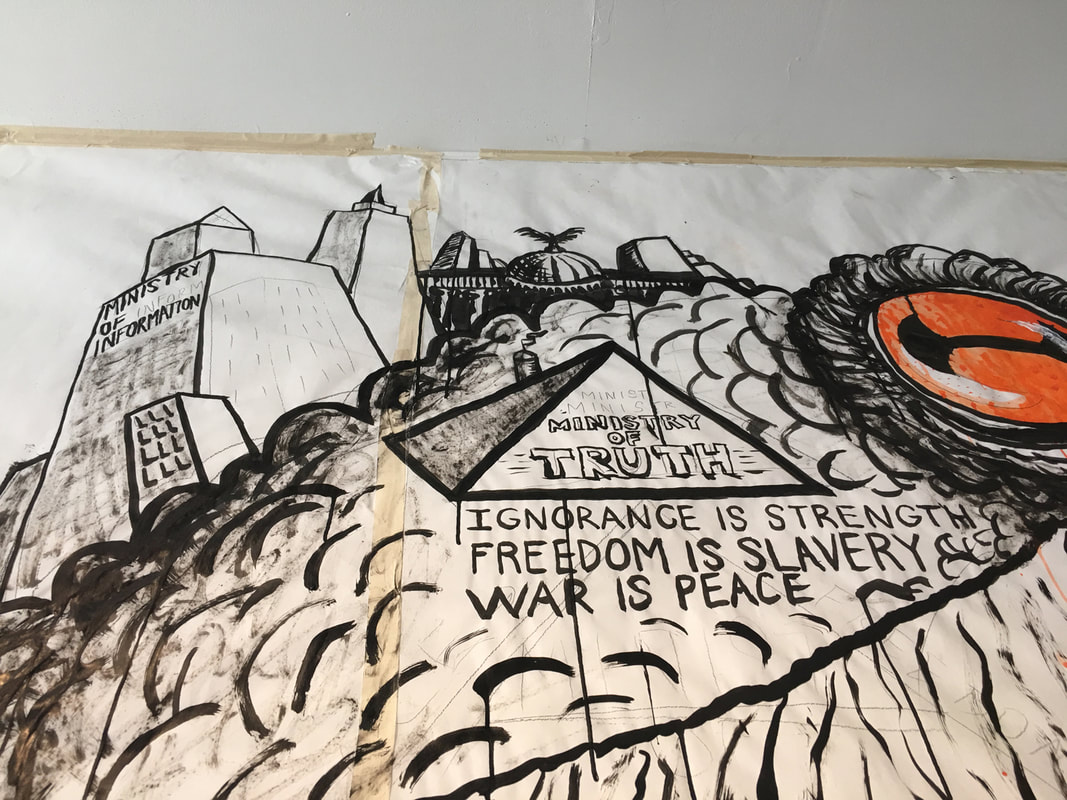 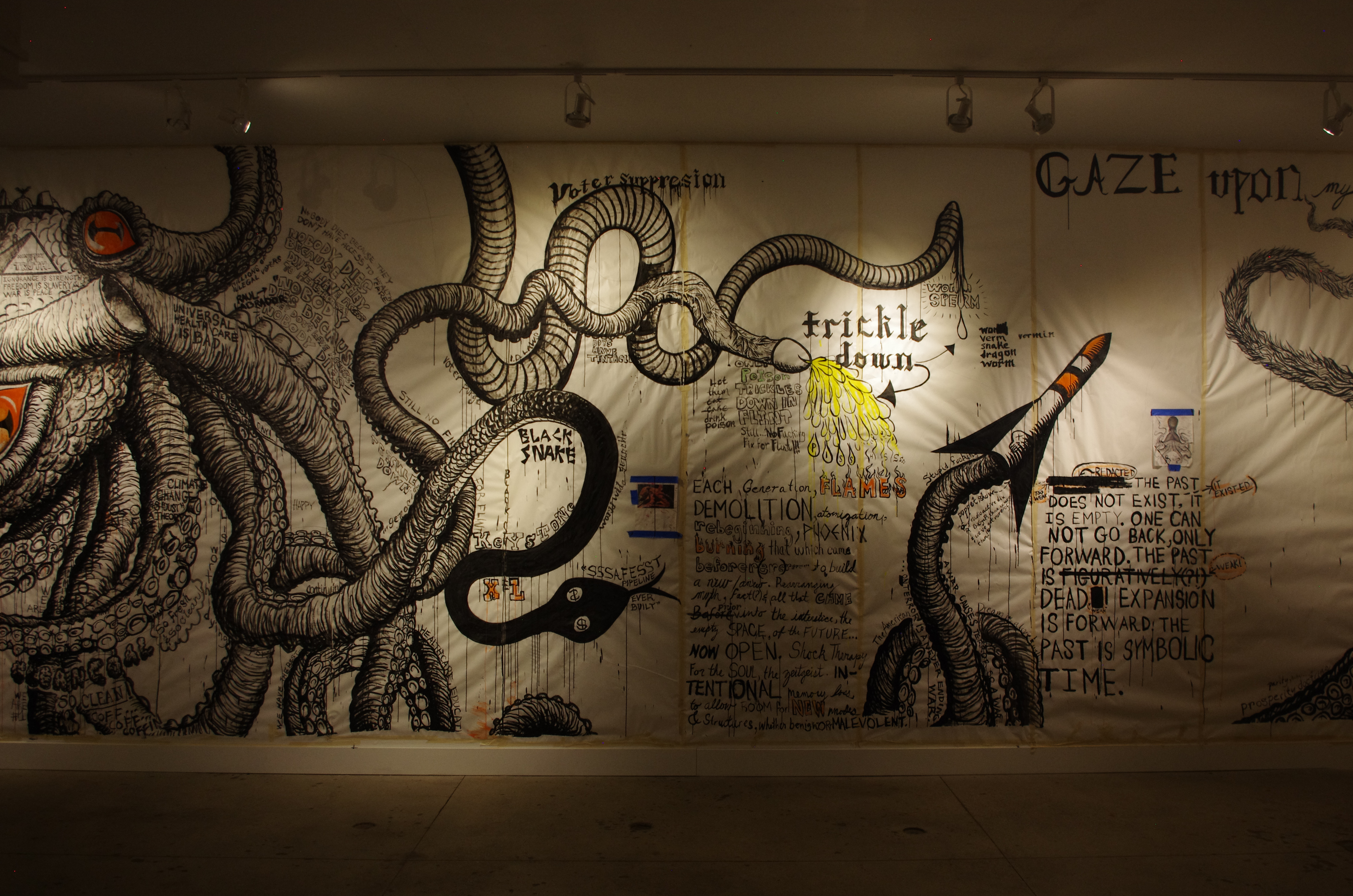 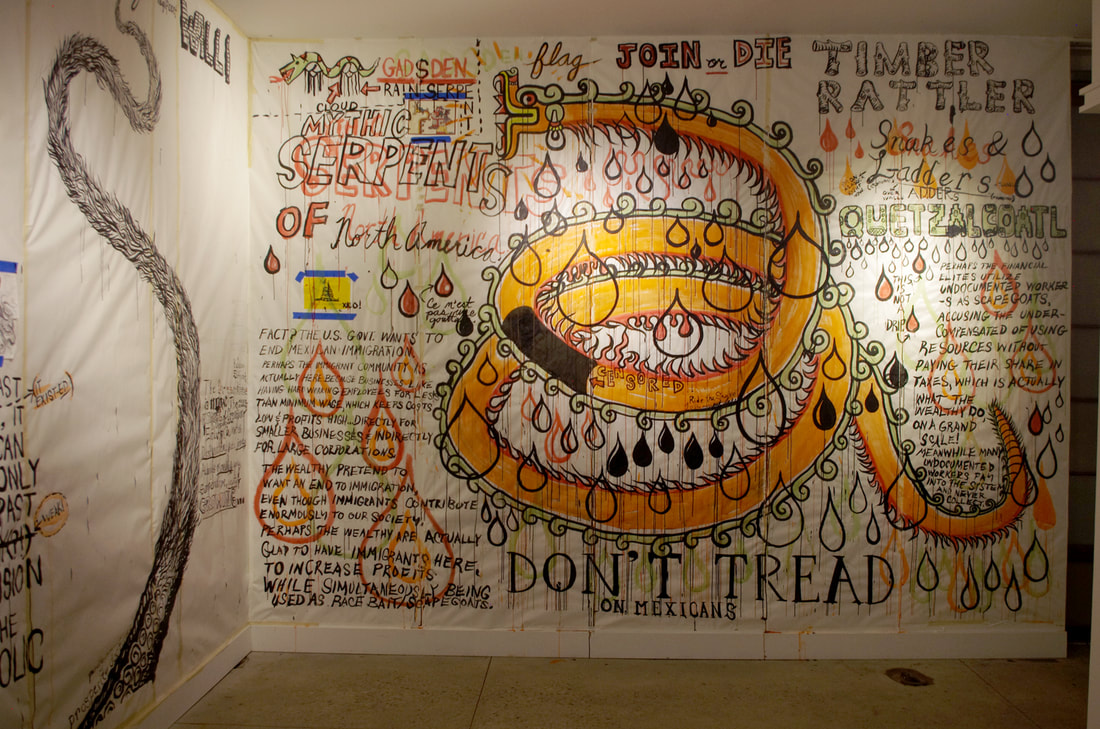 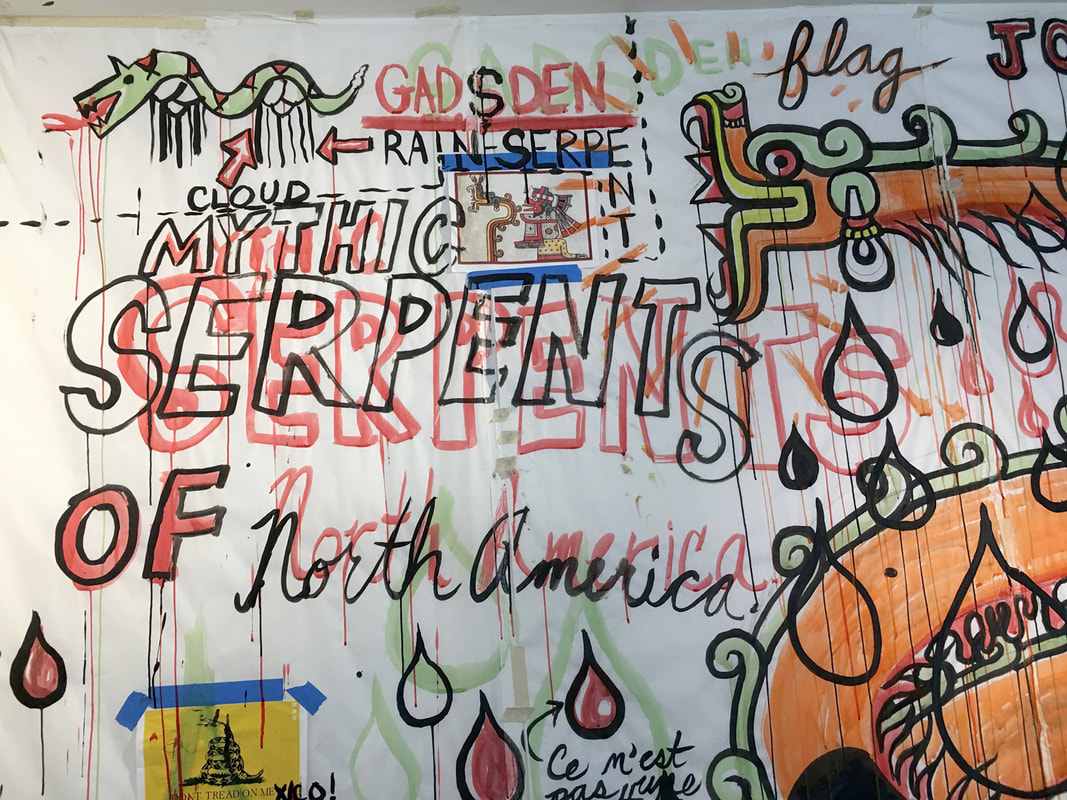 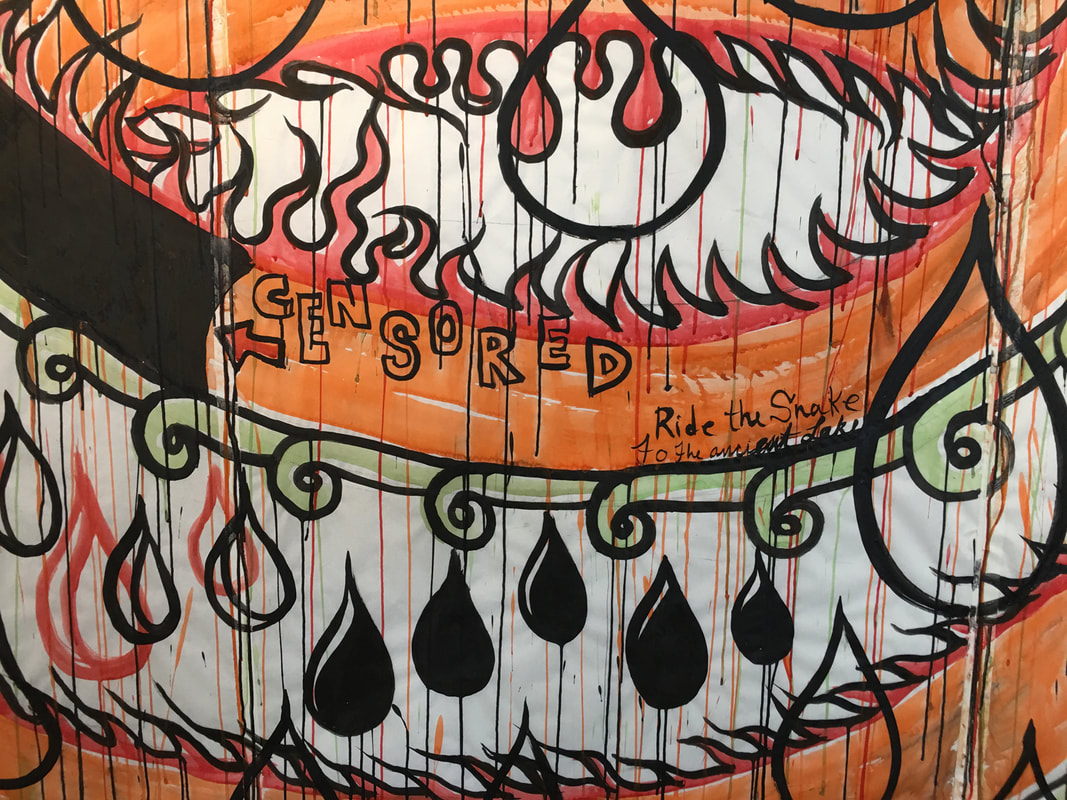 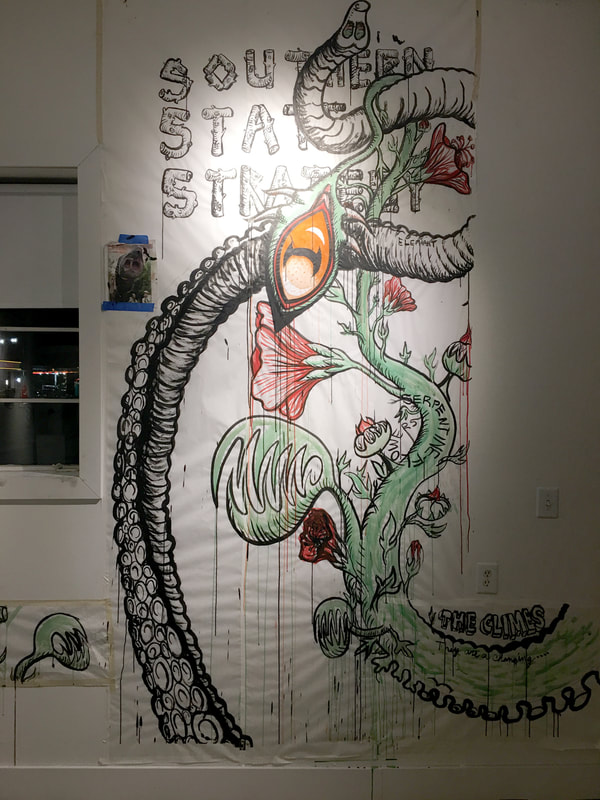 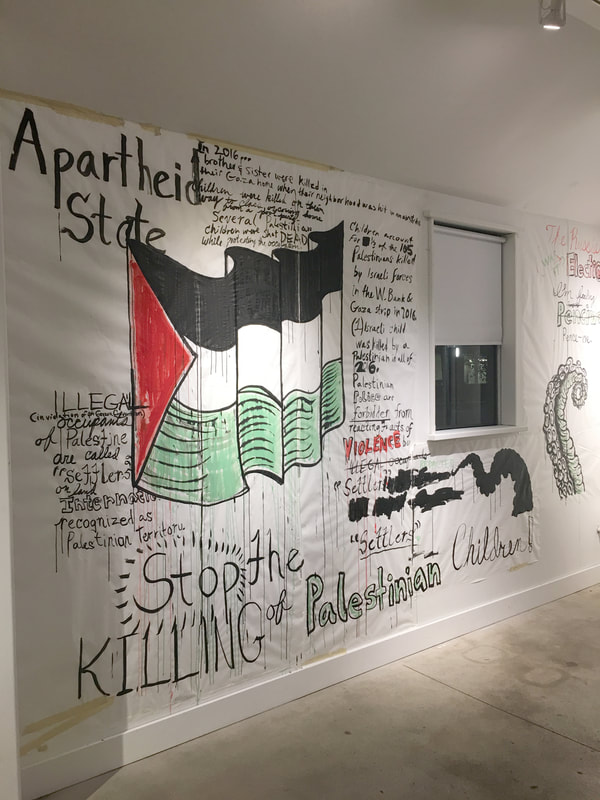 If your opinion of Bryan Anthony Moore was only dependent on the first impression, you’d think him a bombastic wildcard, yet, this artist is both passion and punch. He’s part rockabilly curl, part paint soaked high-tops, and part guru-shaman with a cannonball sense of humor. Give him a roll of butcher paper and a week, and the art will make the artist look tame. Roots caught up with Moore during his artist talk at MING Studios to hear about his newest installation and his other work.

Spontaneous would be an understatement when speaking of Moore’s newest installation at Ming Studios. He’s turned the gallery into a complete canvas in less than a week. Since 2011, Moore has incorporated political elements into his pieces. As he describes his work, the room becomes more historic critique than art studio. This is clearly his objective.

Moore’s work has been displayed everywhere from New York City to Los Angeles. When he speaks of his upbringing, he’s candid, yet reserved. He references his childhood experience as not just an inspiration, but also as a source of the visceral–and sometimes violent nature–of his art. He emphasizes that people welcome horror with a bit of humor. Like a vampire at the door, we want an invite in.

“Some would say that I vandalize my work,” Moore says, and the room laughs. Quietly. Moore has a way of stating out loud what we’re thinking. He affirms his statement by displaying a Victorian-style oil portrait, bulleted in bold spray paints. “I just keep adding to the ruin until the ruin is balanced,” he says. Moore’s observance for the whimsical leads him to declare the obvious, and the result is genius.

Moore is inspired by a mix of past and current events, scientific illustrations, and comic books. In his current exhibit, Alternative Facts, he depicts an alternative history through his art. He states that his art illustrates the mythology of our history, “History is subjective, not scientific – as fictive as it is factual.” He implies writers told the best story, or the most patriotic story, which might not always have been the whole truth. Taking his lead from contemporary writers that alter the past with “edits” that appear to be historically accurate, Moore “antiquates” his work by dipping his pages in tea to subtly wink at the Tea Party’s historic revisionism and places president’s heads atop dinosaur bodies to metaphorically remix the giants of the past. Part current events, part history, part fact, part fantasy, Moore’s multifaceted creations aim to be mind bending, asking those who might want to look elsewhere to look more closely.

Since 2014, Moore has created large installations of his work. He’s exhibited in many states, but Boise is clearly home. Earlier this year, he created a piece in the Boise Art Museum and a pop-up show between Ming Studio’s upcoming exhibits.

While his art may be considered controversial, Moore clearly has a sense of humor about it. . . . Although, he admits that talking with those who may take an affront to his vision isn’t always easy.
One of his former students asserts that Moore’s gift is in the way he responds to resistance – with kindness. While this is true, the smiling artist bares his self-critical honesty almost immediately. Oscar Wilde may have insisted on forgiving one’s enemies, but Moore’s philosophy contends that one should be kind to one’s critics, as nothing annoys them so much. Whether you find yourself bewitched or morbidly curious, one thing is for certain: You won’t want to miss this.

Catch Bryan Anthony Moore forging his latest creation in real-time by stopping by during Ming Studio’s open hours this week (Tuesday through Friday from 3-7pm), or by attending the opening for the completed work on July 14 at 6:30pm.
Wan’t more info? Head on over to Ming Studios or visit Moore’s website: www.bryananthonymoore.net